“The Year’s Most Revealing Musical!” 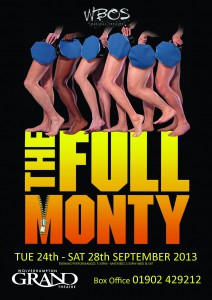 In depressed Buffalo, New York, the once-successful steel mills have grown brown with rust, rolling equipment has been removed, and the lines are silent. Best friends Jerry Lukowski and Dave Bukatinsky, along with the other unemployed mill workers, collect their unemployment cheques and ponder their lost lives, describing themselves as “Scrap”. Elsewhere, Dave’s wife Georgie and her friends are celebrating a night on the town by attending a Chippendales performance. With their new-found independence and wealth as the sole earners of their families, they declare “It’s a Woman’s World”.

While hiding in the bathroom of the strip club, Jerry and Dave hear how unhappy Georgie is over Dave’s insecurities (in part because of his weight) and Pam, Jerry’s ex-wife, laments the loss of her marriage and her plans to take court action against him for the child support payments that he’s failed to make since losing his job. Compromising the situation further is Jerry’s son, Nathan, who reluctantly spends time with him; he has grown tired of his father’s lack of motivation.

After talking to the stripper in the Chippendales act, Jerry and Dave are intrigued by the women’s willingness to pay for a striptease act. Jerry is convinced that his ship has finally come in; he decides to organize a similar act of his own, with the intent to earn enough money to pay for his child support obligations.(“Man”)

The first to join the act is gauche and lonely Malcolm, a security guard at the steel mill where Dave and Jerry once worked. Malcolm tries to commit suicide by asphyxiating himself in his car, but Dave pulls him out. Jerry and Dave discuss various methods to commit suicide, for example: “A Big-Ass Rock”. Malcolm ultimately joins in and with the reassurance of his new-found friends behind him, he joins the fledgling line-up. His rescue and inclusion in the group gives him a newly-optimistic and confident outlook on life. He also starts to grow more independent from his domineering, invalid mother, Molly.

Next on Dave and Jerry’s list is their former foreman, the middle-class aspirant Harold Nichols, who is taking a ballroom dance class with his immaculately-groomed wife, Vicki. While Harold explains that he has concealed his unemployment from his materialistic wife, Vicki blithely sings about her sweet “Life with Harold”. Dave and Jerry tell him of their scheme; with literally no options left, Harold agrees to be the act’s choreographer.

In a sequence of scenes, former co-workers perform a strip-tease auditions. One of the auditionees is invited to sit down after he flunks; he declines, saying that his children are outside waiting ‘in the car’ and that ‘this is no place for kids’ before glancing over at Nathan. Other auditioners are however hired: Noah ‘Horse’ Simmons for his comprehensive dance knowledge (while overlooking evidence of advanced arthritis) and urban legend in the case of “Big Black Man”, Ethan Girard, who longs to dance like Donald O’Connor in “Singin’ In The Rain” and has a jaw-dropping, euphemism-inducing penis. They are also joined by Jeanette Burmeister, a tough, seen-it-all showbiz musician who “shows up, piano and all” to accompany the boys’ rehearsals.

Elsewhere, Dave contemplates his weight and Harold contemplates Vicki’s spending habits, commenting they “Rule My World”. At the first rehearsal, Harold feels the men are hopeless, but Jerry fires them up, encouraging them to think of it not as dance, but as sports moves (“Michael Jordan’s Ball”).

As the men practice, doubts continue to creep in about whether this is the best way to make some money, due to their individual insecurities over their appearances. Jeanette is particularly straightforward (“Jeanette’s Showbiz Number”).

Requiring a deposit at the club, Jerry tries to get seed money from Pam, which she denies. Nathan eventually provides some college funds, and Jerry is moved by Nathan’s growing belief in his father (“Breeze Off the River”).

Later, as the men are rehearsing at Harold’s house, they undress in front of each other for the first time, and have nightmare visions that the women of the town will find “The Goods” will be inadequate. They are interrupted by re-possessors who are scared off by the scantily clad men; their mutual friendships continue to grow.

During a dress rehearsal, the boys get literally caught with their pants down wearing thongs; Jerry, Horse, Harold, Jeanette, and Nathan are taken to a police station. Malcolm and Ethan successfully escape and fall into an embrace after they climb through the window of Malcolm’s house. They are interrupted by the sudden illness of Molly.

After Pam tearfully picks up Nathan (“Man, reprise”), the men are approached on the street by local women acquaintances who have heard of their show. Jerry declares that their show will be better than the Chippendales dancers because they’ll go “the full Monty”, i.e. strip all the way. Dave, meanwhile, quits less than a week before the show, deprecating himself as a ‘fat bastard’ whom no one would want to see in the nude – including his wife, Georgie.

They boys are brought together at the funeral of Malcolm’s mother, where he is joined by Ethan in subtly announcing their relationship – “You Walk with Me”.

Their secret out, all seems lost for the members of Hot Metal – their stage name. But Georgie and Vicki reconfirm their love for their husbands despite their failures (“You Rule My World, reprise”). It is also revealed that publicity from the arrest has spiked ticket sales.

With not much left to lose, and a sold-out show, the men decide to go for it for one night, including Harold, who has found a job. Dave finds his confidence and joins the rest of the group, but Jerry has a last minute loss of his. Nathan convinces him to go on and he joins the boys for the final performance. With the support of all the friends, family, and townspeople, the boys “Let It Go!”