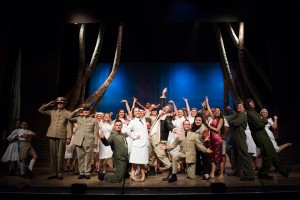 Set in an island paradise during World War II, two parallel love stories are threatened by the dangers of prejudice and war. Nellie, a spunky nurse from Arkansas, falls in love with a mature French planter, Emile. Nellie learns that the mother of his children was an island native and, unable to turn her back on the prejudices with which she was raised, refuses Emile’s proposal of marriage. Meanwhile, the strapping Lt. Joe Cable denies himself the fulfilment of a future with an innocent Tonkinese girl with whom he’s fallen in love out of the same fears that haunt Nellie. When Emile is recruited to accompany Joe on a dangerous mission, Nellie realizes that life is too short not to seize her own chance for happiness, thus confronting and conquering her prejudices.

Famous songs in the production include “I’m Going To Wash that Man Right Out of My Hair”, “There Is Nothing Like A Dame”, “Happy Talk” and “Some Enchanted Evening”.

“South Pacific” premiered on Broadway in April 1949 and was an immediate hit, running for 1925 performances. It won ten Tony awards, including Best Musical, Best Score and Best Libretto. The film came out in 1958; starring Rossano Brazzi and Mitzi Gaynor, it won an Oscar and played at the Dominion Theatre in London for four and a half years!