Priscilla – Queen of the Desert 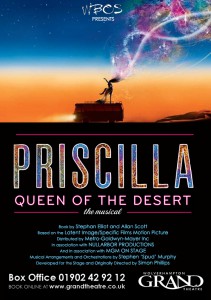 Drag Queen Mitzi Mitosis – whose real name is Anthony “Tick” Belrose – is performing at a club, when his wife Marion, whom he has been separated from for several years, calls to ask him a favour. Marion reveals that she needs an act for a few weeks at her business in distant Alice Springs, Australia. Tick is at first reluctant, but Marion informs him that part of the reason she’s asking is because their eight-year-old son Benji wants to meet his father. Tick confides in another fellow drag queen Farrah, before deciding he will go. Tick calls a friend, a transsexual named Bernadette – whose birth name is Ralph – to join him but sadly, Bernadette’s husband has just died. The pair meet at the funeral where Bernadette agrees to join him. Tick also asks a friend Felicia – whose real name is Adam Whitely – to come with them, with Bernadette taking an immediate dislike to his show-off performance style. The newly formed trio buy a “budget Barbie campervan” they nickname “Priscilla, Queen of the Desert”. Tick informs them that the trip is a favour to his wife, but does not tell them it is also to meet his son who wants to see him. The group goes into a bar in full drag, and start a dance party, but when they return to the bus learn that the townspeople wrote hateful statements on the bus in spray paint. The next morning, Priscilla breaks down and Adam buys lavender paint to erase the vandalism. They manage to get the locals of another town on their side and meet Bob, a mechanic from a small town nearby who agrees to help fix Priscilla. The group celebrates that they’ve found people that accept them.

Bernadette talks with Bob and learns that when he was in Paris, he saw her when she was a young “Les Girl”. The two begin to have feelings for each other. Later in a bar, the trio is about to perform when Cynthia, Bob’s wife, interrupts their act by “popping” ping-pong balls. After this, the trio leaves, leaving Bob to wonder about his feelings for Bernadette. Suddenly, Bernadette asks if he wants a free ride back to his real home, to which he agrees. Later when they arrive, Adam dresses up like a woman to try to meet men, but ends up getting chased and nearly becomes the victim of a hate crime until Bernadette rescues him by kicking one of his attackers. As another act performs first, the trio gets ready to perform a variety of songs that they sang or lip-synced on their journey. Afterwards, Tick finally meets his son, who accepts his father’s sexuality and lifestyle. Afterwards the gang talks about their plans after Alice Springs, and realize they can’t leave each other.