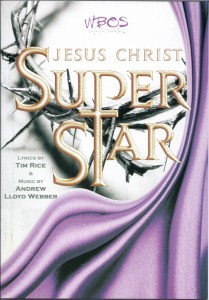 In 1972 Tim Rice & Andrew Lloyd Webber’s Jesus Christ Superstar exploded onto the West End stage. The Musical would never been the same again. Now this astonishing musical is back!

Rice and Lloyd Webber’s famous rock opera highlights the political and interpersonal struggles of Judas Iscariot and Jesus of Nazareth. Based on the Gospel of St John, it is an account of the last seven days in the life of Jesus, beginning with the preparation for Jesus’ and his followers’ arrival in Jerusalem and ending with the Crucifixion.

Returning to Wolverhampton this October, and then Birmingham in November, WBOS’ imaginative and powerful new production reminds us that no musical before or since has been able to touch audiences with quite the same emotional impact.

Judas is beginning to worry about Jesus (Heaven On Their Minds). He doesn’t believe that Jesus is the son of God as many others now seem to think, and he is afraid that if Jesus starts getting too loud, they will draw attention from the Romans, who will then crush them. That Friday night in Bethany, the apostles are asking Jesus about his plans for the future (What’s the Buzz). While they pester Jesus, Mary Magdalene seeks to comfort him by rubbing his feet and hair in oil. Judas arrives, and asks Jesus what is doing with a woman of Mary Magdalene’s reputation (Strange Thing Mystifying). Jesus says to leave her alone, not to throw stones unless your slate is clean, and states that no one there cares about him. Mary Magdalene tries to calm Jesus down (Everything’s Alright) and soothes him, telling him not to worry. Judas, meanwhile, is asking Jesus why good money was used on expensive ointments instead of the poor. Jesus replies that they can’t be helped, and alludes to his death, saying that they’ll be lost when he’s gone.

The following Sunday in Jerusalem, High Priest Caiaphas is with other priests, discussing what to do about Jesus (This Jesus Must Die). They conclude that Jesus must die.

When Jesus arrives in Jerusalem, the crowd is ecstatic, and sings hosannas (Hosanna). Simon Zealots tries to convince Jesus that he can convince the people of Jerusalem to arm against Rome (Simon Zealots). Jesus answers that no one understands what true power or glory is, and that to conquer death, one must die (Poor Jerusalem).

The next day, Pontius Pilate has a dream about Jesus, and his role in his death (Pilate’s Dream). Jesus arrives at the temple in Jerusalem to find it a haven for moneylenders and merchants. He chases them out in anger (The Temple). He is then surrounded by lepers and the poor, begging to be healed. Jesus yells at them to heal themselves. Mary Magdalene tries to comfort him again (Everything’s Alright (Reprise)). After Jesus is asleep, Mary Magdalene tries to decide how to deal with her love for him (I Don’t Know How To Love Him). On Tuesday, Judas goes to talk with Caiaphas (Damned For All Time) and tells them where to find Jesus on Thursday night (Blood Money). A distant choir tells Judas, “Well done.”

It is Thursday night in the garden of Gathsemane, and Jesus is performing the Last Supper (The Last Supper). The apostles discuss how they’re glad to be where they are now, while Jesus suffers from doubt. He announces that Peter will deny him, and another of his twelve chosen will betray him. Judas confronts him, telling Jesus that he knows very well that Judas is the one that will be the betrayer. Judas leaves, and the other apostles go to sleep. Jesus stays awake, and prays (Gethsemane). He wants to know why he must die, why he must go through with his Father’s plan.

Judas arrives later, and betrays Jesus with a kiss (The Arrest). Caiaphas asks if he is the Son of God, and Jesus answers that that is what others say that he is. Peter denies he ever knew Jesus to three people (Peter’s Denial). Mary Magdalene wonders how Jesus could have known. Jesus is taken to Pilate, who sends him off to Herod, since Jesus comes from Galilee (Pilate and Christ).

King Herod asks Jesus to perform miracles to prove that he is the Son of God; if he does, Herod will let him go free (King Herod’s Song). Jesus refuses, and he is sent back to Pilate. Judas sees the bruised and beaten state Jesus is in, and wonders how he could have done such a thing to Jesus. He hangs himself, saying that Jesus has murdered him. Pontius Pilate tries to help Jesus, and tries to sate the crowd’s cry for crucification with 39 lashes (Trial Before Pilate). But the crowds still clamor for Jesus’s death, and he is sent to be crucified. The voice of Judas is heard as Jesus carries his cross (Superstar). He wonders why Jesus choose the particular time and place that he did, and why he choose to sacrifice himself for others. Jesus is nailed to the cross (The Crucifixion). He dies, and into his Father’s hands he commends his spirit. His body is then taken to a tomb (John Nineteen Forty-One).

Maid by the Fire – Felicity Cooper