“Grease is the Word!” 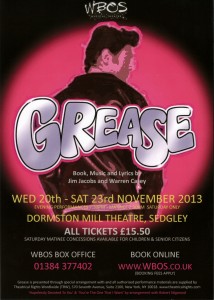 The kids think they rule in small town Rydell (Grease is the Word). They head back to school – their last year at Rydell High. Danny is a member of the ultra-cool T-Birds – only interested in cars, chicks and hanging out with his mates; Kenickie, Sonny, Roger and Doody. Sandy – the new girl in school – doesn’t fit in with the Pink Ladies – Rizzo, Jan, Marty and Frenchy – although they are interested in her summer romance (Summer Nights). Sandy and Danny are unexpectedly reunited – she is thrilled to see him again but Danny isn’t sure how hanging out with a ‘ good’ girl will affect his image.

All the boys contemplate growing up (Those Magic Changes) and what lies ahead.

Marty and Frenchy include Sandy in their circle, inviting her round to a sleepover but she is dismissed by Rizzo (Look at me I’m Sandra Dee); she just doesn’t fit in with the gang.

The boys, meanwhile, meet up at the garage to see Kenickie’s new car – he has been working all summer to buy it. The others think it is a heap of junk but Danny and Kenickie persuade them it will be a great way to attract the girls (Greased Lightnin’)!

After being rejected by the Pink Ladies, Sandy tries cheerleading (Rydell Fight Song) but doesn’t seem to fit in there either. She bumps into Danny again but things are awkward between them.

All the kids meet up on the football field, Roger and Jan get talking and, slowly, discover they like each other and have a lot in common (Mooning) . A party atmosphere follows, as the kids celebrate their friendships (We Go Together).

It’s time for the school dance, everyone is paired off and wearing their finest (Shakin’ at the High School Hop). Vince Fontaine is hosting the evening – much to Marty’s delight. Only Sandy is missing out on all the fun; she is stuck at home with a head cold (Its Raining on Prom Night). Things hot up at the dance – a dance contest is announced and Danny pairs up with Cha-Cha, a top dancer. They go on to win the contest (Born to Hand Jive) although Miss Lynch disapproves of some of their dance moves. All alone Sandy faces up to the fact that she still loves Danny (Hopelessly Devoted to You), however futile it may be.

Things aren’t working out too well for Frenchy either. Having left high school to train as a beautician, she is finding that she may not be cut out for the job – but can’t admit it to her friends (Beauty School Dropout).

Sandy and Danny finally get together; he borrows Kenickie’s car and takes her to the drive-in. Sandy is there to watch the movie but Danny has other things on his mind. Sandy is upset when he takes things too far and leaves him alone in the car, wondering if he’ll ever get it right (Sandy).

The gang all hang out at the garage listening to music (Rock ‘n’ Roll Party Queen). Sandy joins them in the hope that Danny will appear. Rizzo makes it clear that she still isn’t welcome amongst them. Everyone hastily leaves, except Sandy, whose sympathy is rejected by Rizzo (There Are Worse Things I Could Do). Sandy realises if she wants things to be different then she needs to make some changes about herself (Look At Me I’m Sandra Dee – reprise).

All the kids at the burger bar are in for a big surprise – especially Danny – when a transformed Sandy arrives, looking hot and with an attitude to match (You’re the One That I Want). Once again the mood is up – all the kids celebrate being young and in love (Finale).